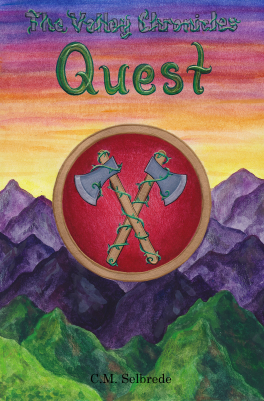 I’ll be honest- I don’t think I’ve sold a single copy of Quest online. Yes, that includes eBooks, not just the ridiculously overpriced hardcover, and yes, financially, Quest has probably made like 5% of what the first book made.

It is still an unqualified success.

Spoiler alert- I don’t do this for the money! Money is nice. I like money. But I never expected anyone would pick up my books, declare me the next J.K. Rowling, and throw cash at me. No, I write because I like telling stories, and with Quest, the story really came through.

Written over the course of only a few months, in between classes and scenes of the school play, I cobbled together this novel, learning just how hard it is to write a sequel: To jump forward in time, to constantly have to reference the first volume, etc. It sounds like a mess, and it was. But it worked.

Recently I had my books reviewed by Kirkus, and while they had generally positive feelings toward the first book, they actually seemed to enjoy the second one. I received a dare-I-say “positive” review- referencing an admitted flaw in my dialogue- but immediately mitigating this by praising my own “gifted plotting.”

Yeah. They said that.

“…For this second volume in his series, Selbrede doubles down on the quirkiness and fantasy tropes, which include an apocalyptic prophecy that the world will end if anyone from the Valley passes the Mountains. Pushing against the fourth wall, Violet thinks, “that was exactly what our fantasy adventure needed—a vague and unhelpful set of deadlines and rules.” Chapters told from Hodgey’s viewpoint are intriguing, as well, particularly when the other animals see him as one their own. Frequently, however, characters who aren’t from Earth often use the colloquial, sarcastic language of the protagonists; for instance, clever Princess Sapphire says things such as “I don’t think brute force is going to cut it.” Luckily, Selbrede’s gifted plotting still takes things in numerous, satisfying directions. A devastating epilogue will make the next volume a must for fans.
An epic fantasy notable for its deceptions, elaborate traps, and worldbuilding.”

I really enjoyed writing this book- it was the least dark of the trilogy, it featured a lot of moments both scary and fun, and it gave me the chance to introduce Bananas, who I’d been so sure I’d never be able to fit into the final draft. It… worked. It all worked, and I’m so, so pleased with Quest as a final product.

I could go on for a while, but I won’t because the review says a whole lot in my proud opinion. So I’m signing off here, and will return to the drudgery that is trying to make the third book hold up to the higher bar Quest set.