Though I recently ranked my top 25 television shows of all time, I chose to omit animated series due to a personal bias towards live action. The following cartoons are my favorites, presented more fondly than if they’d been mixed with the others. 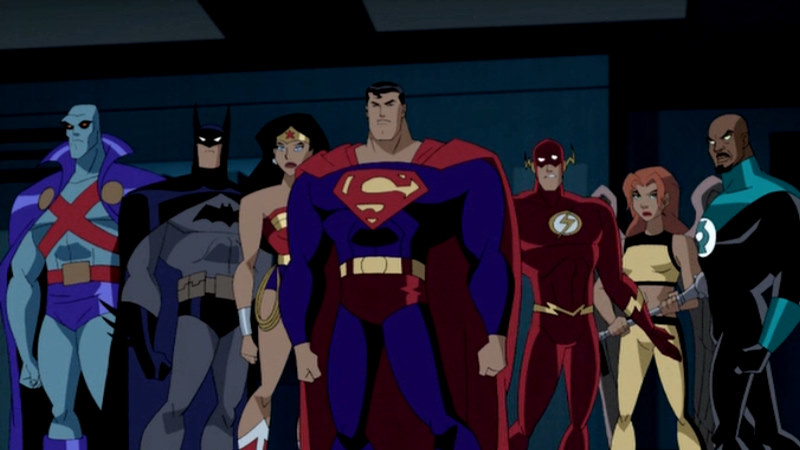 Justice League and its successor, Justice League Unlimited, were the last two entries in the DCAU (DC Animated Universe) that began with the iconic Batman: The Animated Series (which somehow didn’t end up on this list, I can’t explain why). Justice League adapted some amazing comic book stories with the seven-person cast of Superman, Batman, Wonder Woman, Martian Manhunter, Flash, Green Lantern, and Hawkgirl, giving the series a wonderfully intimate look at the core cast of characters and ensuring the viewers cared about the conflicts. Seasons 3-5 of the show evolved into JLU, a continuation of the show featuring an expanded league of over 50 superheroes, mixing and matching throughout the series.

Both halves of this franchise hold special places in my heart… when I binged them via Netflix a few years ago, JL seemed to have stronger individual tales while JLU’s variety and overarching storylines made for a just as exciting experience. JLU also featured a phenomenal take on the Question, a favorite hero of mine, who certainly made the series worth watching. 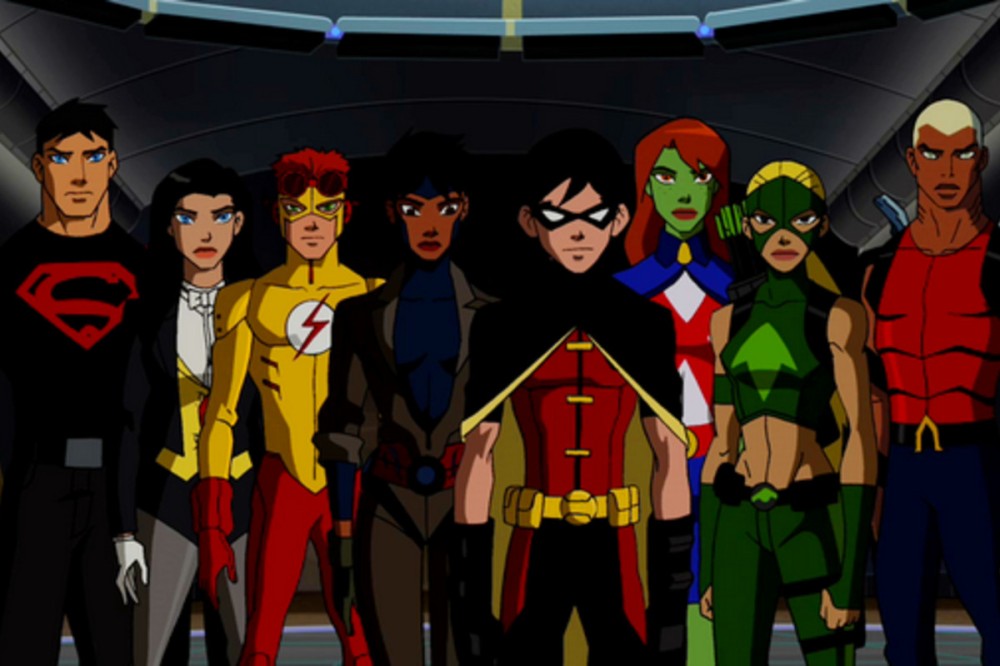 The first television series I watched week-to-week (well, besides PBS Kids’ Fetch! With Ruff Ruffman…) Young Justice certainly holds a special place in my heart. Balancing realism with an extensive understanding of the source material and a willingness to blaze its own trail, over the course of its 2 seasons YJ solidified my love of comics permanently. After two intricately plotted, character-rich seasons, the show was unexpectedly cancelled, a loss mourned by fans until its unexpected revival was announced, slated for next years.

Young Justice followed a team of sidekicks sent on stealth missions by the JLA as they came of age and learned to trust each other. The impeccable characterization and plotting of the first season, however, was somewhat eclipsed by the overly ambitious second season, which immediately alienated viewers with a massive time jump and an overly inflated cast. Things also got way too dark way too quickly, killing the balance the first season had struck. I wish I could say I’d be watching S3 when it premieres, but the promise of an even darker season and its place as a streaming exclusive for DC’s new service makes it too much to bite off for me. 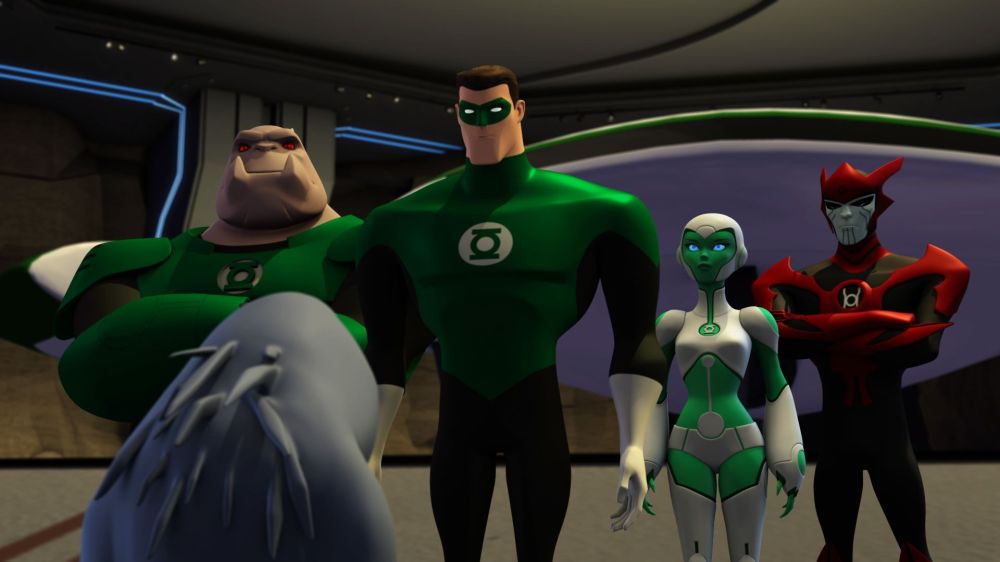 To be honest? Not a huge Hal Jordan fan, nor a fan of the stylized 3D animation GL:TAS pioneered, so I legitimately expected to hate this series. For this reason, I didn’t start watching until midway through the season… and discovered, to my surprise, it was pretty dang good.

See, GL:TAS was about Hal Jordan, but it was mostly a Star Trek-esque series following an exploratory vessel and its delightfully complex crew. Joining the suitable enough (but overused) Hal is Kilowog, grizzled veteran of the Corps, Aya, the ship’s AI who is a lot more complex than her demeanor would suggest, and Razer, a vengeful enemy Red Lantern who finds himself becoming a part of this makeshift family. Over the course of the first and only season, the four developed an insane amount (especially Aya and Razer). The plotlines dipped expertly but sparingly into the comic book mythos, and the overarching story arc kept me on the edge of my seat,

Green Lantern was criminally underrated, and I would love to see a Season 2. 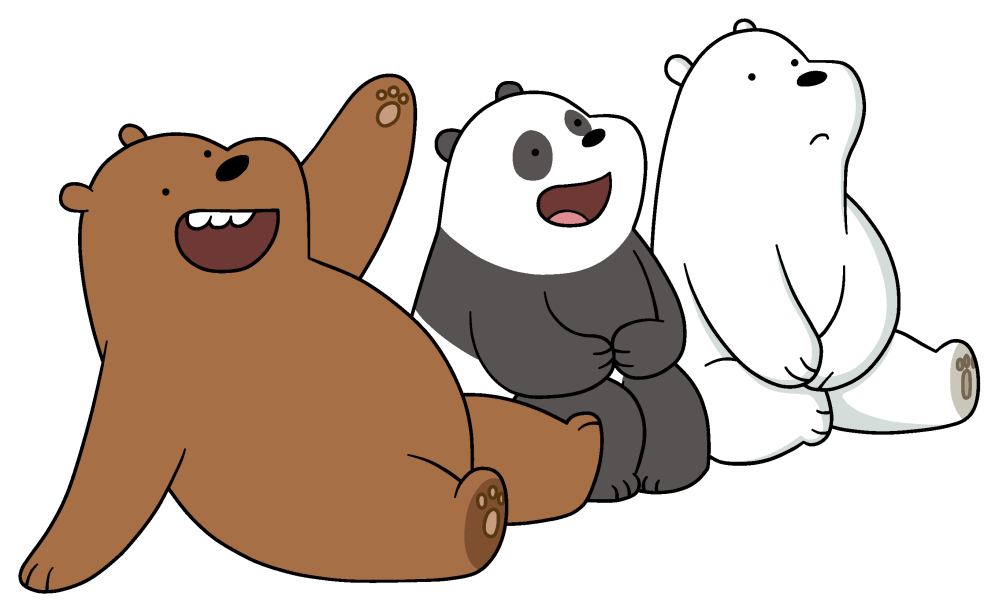 We Bare Bears appealed to my family for an obvious reason- besides my sister Clara’s love for bears- and that reason was the number 3. My triplet sisters and I started watching the show for the numerical parallel, but stayed for the personality parallels.

In Grizz, the extroverted brown bear, we saw my sociaable sister Anna; and in Ice Bear, the eccentric and quiet polar bear, there were obvious strokes of Clara. I, myself, am represented by Panda, the (somewhat pathetic) most helpless bear, constantly on electronics and or social media despite his shy nature. It isn’t a perfect comparison, obviously, but it’s pretty darn close.

These parallels elevate the stellar plotting and hilarious episodes to side splitting, as my family is able to recognize ourselves in the strange situations and the brothers’ devotion to each other. The only reason this show isn’t higher is that comedy cartoons just aren’t my favorite thing to watch. 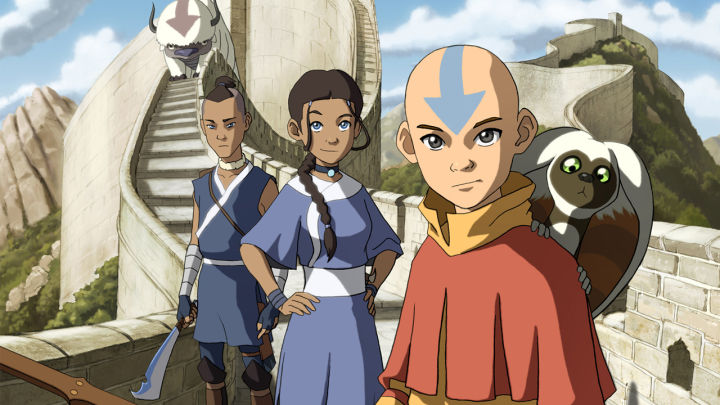 Avatar is revered among almost the entirety of my generation, and for good reason. Over the course of three, rich, heartwarming, and hilarious seasons, ATLA developed a fully formed world, intensely believably characters, and one of the most emotional and complex conflicts on TV. If you haven’t seen it, you should go find it online. Unless you’re a soulless monster with zero taste, it will amaze you.

ATLA is perfect. I just didn’t grow up on it, so it doesn’t mean quite as much to me.

X-Men: Evolution holds the distinction of being simultaneously the least comics accurate X-Men animated adaptation, but somehow, the best. Running for four seasons, XM:E chose to introduce a core cast of teenage characters and three teachers (Professor Xavier, Wolverine, and Storm), a wise choice which allowed Wolverine and Storm to be their best selves while portraying teenage mutant angst wonderfully. Despite the relatively childish nature of the show, it packs many emotional beats, compelling conflicts, and intriguing character developments… almost everyone on the show is a 3-Dimensional character, an impressive feat considering the simplistic format and plotlines.

XM:E also benefitted from the lack of the cringeworthy Jean/Scott/Wolverine love triangle, (though it did play around with a slightly grating Jean/Scott/Rogue one) and the decision to introduce Wolverine’s teenage clone, X-23, who would soon become a staple of the comics.

X-Men: Evolution is insanely fun and bingeable, and I rewatch it almost every chance I have. It’s one of those shows that will really stick with you, long after you watch the finale. 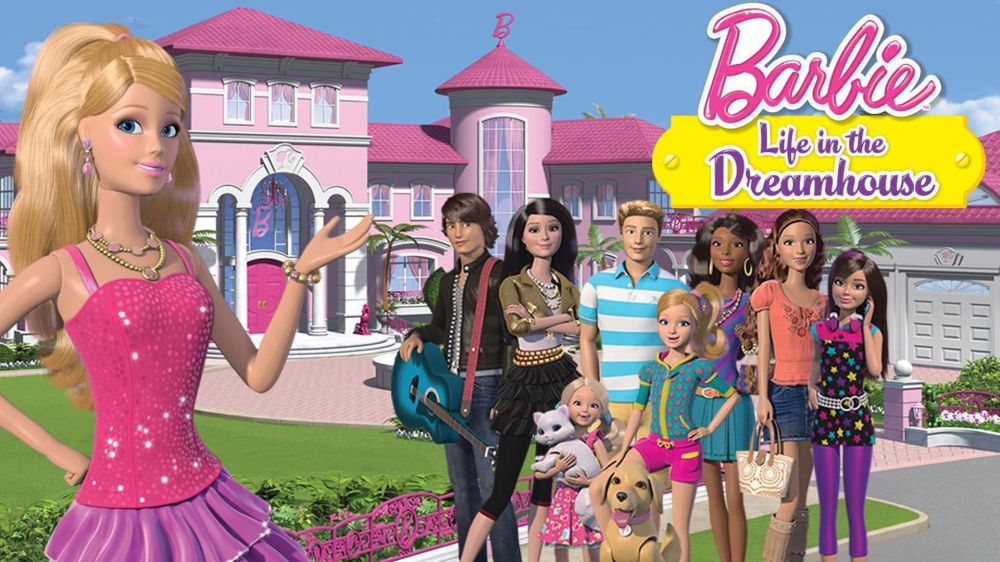 Yeah, I didn’t expect to see this here either.

Barbie: Life in the Dreamhouse is a series of online shorts far more hilarious then they have any right to be. Simultaneously celebrating and spoofing Barbie, Dreamhouse introduces a surprisingly well developed cast fully aware of their status as dolls (“Barbie, did you cut your hair? You know it doesn’t grow back!”), Barbie’s agelessness and general luck, and the problems that come with being made out of plastic.

Dreamhouse is legitimately hilarious, if you can cope with the fact that you are watching a Barbie television series. Watch if you dare… I won’t try to convince you. This is a decision you should make for yourself. 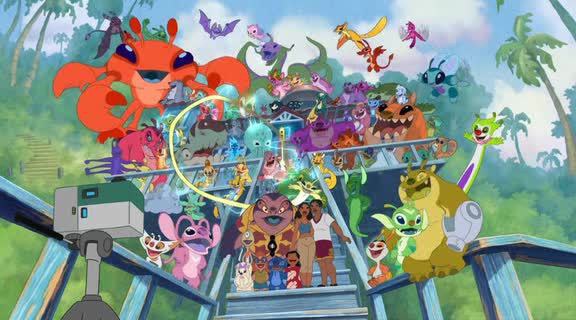 This entry is almost 100% based on nostalgia.

Lilo & Stitch was one of, if not the first, films I watched in my childhood. We loved it for a variety of reasons- the quirky nature of Lilo, the lovability of Stitch, the fact we were currently residing in Hawaii- and we eagerly consumed every piece of the franchise we could find. That included the Disney Channel television series which ran for three years before concluding with Leroy & Stitch, a direct-to-TV movie.

This television show was repetitive, and not especially well crafted compared to the others on this list, but it had a whole lot of heart. Lilo and Stitch, not to mention their extended family, were just as fun to watch as they were on the big screen, and their quest to reunite the experiments with their “one true home” led to some fun and diverse stories.

Plus, it crossed over with Kim Possible. 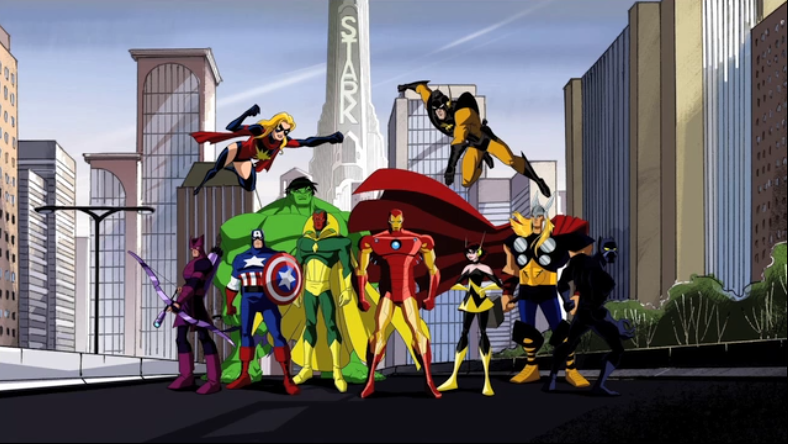 I’m a big (comics) Avengers fan, and Avengers: EMH! is the best Marvel comic book adaptation to come to the small screen.

Avengers: EMH adapted almost every notable classics Avengers story, modernizing them and making them a ton of fun to watch. Though, like Young Justice, the second season might’ve moved faster than its own good, EMH captured the soul of the Avengers with far more depth and character than its overrated cinematic counterpart, giving us comics-accurate Avengers founders Ant-Man and the Wasp, a Hawkeye with actual personality, and a theme song that still gets stuck in my head.

It was a truly dark day when EMH! was cancelled in favor of a more MCU-esque Avengers show, cutting short all the amazing character development and plotlines this phenomenal show had yet to cover. 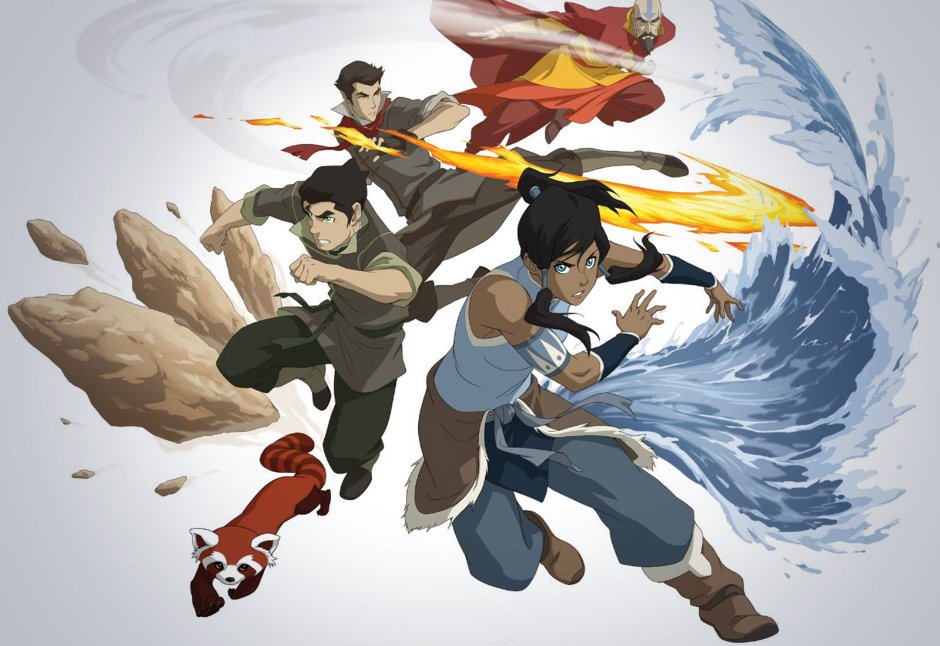 It’s difficult for me to surmise how Legend of Korra ended up at the front of this list. While darker and more complex than its predecessor, Avatar: The Last Airbender, Legend of Korra never quite reached its full potential… never offering the same character development or depth that Avatar was known for. However, it was truly moving, and its final two seasons were the highlight of the entire Avatar franchise for me.

Despite questionable choices in handling the remaining characters of Avatar, LoK expertly “modernized” the world of The Last Airbender, giving us the stylish and fun Republic City built off the architecture of the four (mostly) united nations. The presence of increasingly modern trappings alongside the mystic arts lent a strange feeling of nostalgia and tiredness, as both the viewer and the characters question the Avatar’s usefulness in the current era.

The first season of Korra started strong, but fell into a love triangle and flattened the bad guy far, far too quickly. Consequently, season two offered a compelling storyline, but dragged it out far too long and muddled the message they were trying to tell. While imperfect, and certainly lower quality than Avatar, these laid down essential groundwork for Seasons 3 and 4, some of the best TV I’ve ever had the privilege to watch.

Both are dark, dangerous, and tense, and both explore drastically different would-be conquerors, each with a violent worldview. In Season 3, the viewer meets Zaheer, a violent anarchist whose actions pave the way for Kuvira, Season 4’s communist dictator. Both have sympathetic ideas and viewpoints, and both push Korra to (and past) her limits.

Korra is, in my opinion, far more interesting to watch then Aang, even if Aang’s friends were more developed. Like Young Justice and EMH, Korra was cancelled and shortened, forcing it to make do with a smaller episode count and lower budget. It is remarkable that, considering this, the two latter seasons were such strong works of art.